Pakistan is blessed with stunning natural and artificial lakes. These lakes are renowned for their fresh transparent water, spectacular beauty and natural scenery. The largest freshwater lake of South Asia called the Manchar Lake is present in Pakistan. The country is also home to the world’s 25th highest lake called the Rush Lake.

Here is List of Top Lakes in Paksitan which will make your Trip most adventurous. 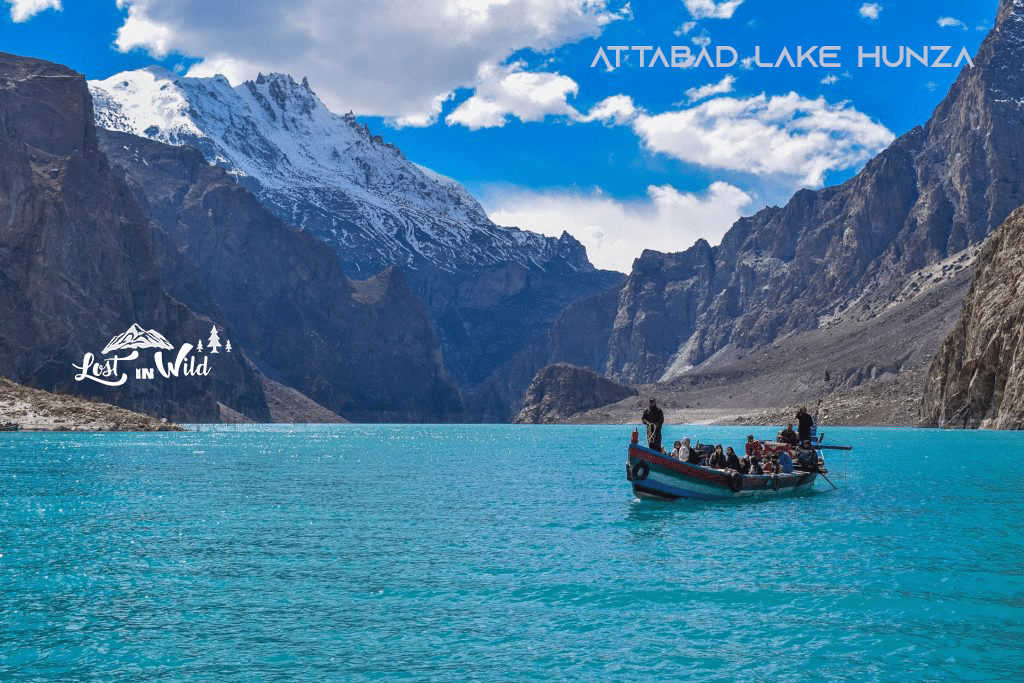 The Attabad Lake is a freshwater lake situated in the Gojal Valley of Hunza in Gilgit Baltistan. It is one of the top lakes in Pakistan in terms of its crystal-clear water and beautiful scenic view as it is surrounded by equally exquisite mountains. Attabad Lake was formed as a result of a massive landslide that blocked the natural flow of Hunza River in 2010. The lake is one of the greatest tourist attraction in the area.

Sheosar Lake or Shausar Lake is considered amongst the most beautiful Pakistan Lakes. It is located in the Deosai National Park of Gilgit Baltistan at 4,142m altitude. The lake is spread over an area of 2.3km, has a depth of 40m and width of 1.8km. Sheosar Lake is accessible through Astore District as well as Skardu. Traveling from Skardu to Sheosar Lake takes only a few hours, while, that from Astore District requires 4 days. The tourists must visit Sheosar Lake in the summer (from June till September) as the region is covered in thick snow during winter.

Ansoo Lake is one of the highest Pakistan lakes situated at the height of almost 4,245m above sea level near Malika Parbat in the Kaghan Valley of KPK. The lake is named so because of its shape which is like a teardrop (in Urdu “Tear” is called Ansoo). Ansoo Lake is accessible between July and August.

Ratti Gali Lake is present at the altitude of 3700m above sea level in the Neelam Valley of Azad Kashmir. It is an alpine glacial lake and is famously known as “A Dream Lake” due to its immense beauty. Ratti Gali Lake is accessible through a 19km hiking trek from Dowarian base camp between June and October since the area is covered with snow in the remaining months of the year. It is one of the top lakes of the region.

Satpara Lake is a breathtaking natural lake located at the height of 8650 feet near Skardu in Gilgit Baltistan. It is one of the largest Pakistan Lakes that covers an area of approximately 2.5km2. The lake is filled with water from Satparan Stream which is then supplied to residents of Skardu Valley. To reach Satpara Lake, 20 minutes’ drive from Skardu is required. Tourists must visit the lake during the summer season.

Borith Lake is one of the top lakes located at the height of 2600m in the Hunza Valley of Gilgit Baltistan. The lake is reachable through a 2 km drive from Husseini village in the upper Hunza or by a 2 to 3 hours trekking from Ghulkin glacier. Borith Lake is accessible from March till June.

Lower Kachura Lake is situated at 2500m altitude in the Kachura Village of Skardu City, Gilgit Baltistan. It is famously known as the Shangrila Lake due to the renowned Shangrila Resort that was constructed on its bank in 1983. Lower Kachura Lake is listed second amongst the most beautiful Pakistan lakes. The lake is reached after 20 minutes drive from the Skardu town. Shangrila Lake must be visited during summer.

The Upper Kachura Lake is a twin lake of Shangrila Lake situated in the Skardu District of Gilgit Baltistan at an altitude of 2500m in the Karakoram Mountain Range. It is is one of the most beautiful Pakistan Lakes with clear transparent water. The lake can only be accessed during summer and its surface is frozen during winter.

Rush Lake is amongst the top lakes in Pakistan. It is the highest alpine lake in the country located at the altitude of 5,089m near Rush Pari Peak in Nagar Valley of Gilgit Baltistan. The lake is accessible from Nagar Valley, Miar Glacier and Bualtar Glacier. The best time to visit Rush Lake is in the summer season.

Kundol Lake is one of the most beautiful Pakistan Lakes located at the height of 9,950 feet amongst the Hindu Kush Mountains in Swat Valley of KPK. It can be reached via road from Kalam to Ladu Village from where it requires 4-6 hours drive to the lake.

Rama Lake is among the stunning Pakistan lakes situated near Astore Valley in Gilgit Baltistan. It can be accessed after 2 to 3 hours drive from the Fairy Meadows on the Karakoram Highway. Tourists should visit Rama Lake during the summer season.

Hanna Lake is listed amongst the most visited Pakistan Lakes. It is located in Urak Valley at a distance of 17km from Quetta in Balochistan. Hanna Lake was built in 1894 during British Reign between two mountains. The turquoise-colored water of the lake is a stunning contrast to the sandy brown colored hills in the background. Hanna Lake is accessible in all seasons of the year.

Karamber Lake or Qurumber Lake is the world’s 31st highest lake situated at the altitude of 4304m in Boroghil Valley of Chitral District in KPK. It is placed second among the top lakes of Pakistan and one of the highest biologically active lakes on Earth. The water clarity level of Karamber Lake is recorded to be 13.75 (Secchi Disc Reading), which is the highest value ever recorded in lakes in Pakistan. The lake can be reached after 205km drive from Gilgit. The best time to visit Karamber Lake is during summers.

Mahodand Lake is located at the height of 2865m in the Upper Usho Valley of Swat Valley in KPK. It can be reached after 40 km drive from Kalam Valley. Mahodand Lake is one of the most beautiful Pakistan Lakes as it is surrounded by a dense forest, lush meadows and the Hindu Kush Mountains.

Shandur Lake is considered amongst the most beautiful Pakistan Lakes situated at the altitude of 3738m in the Ghizer District of Gilgit Baltistan. It is surrounded by the Hindu Kush Mountains and covers an area of 2.6km2. It is accessible from late April till early September.

Siri Lake is located at an elevation of 2590m in Siri Village of Kaghan Valley in KPK. It lies on the way to Payee near the Shogran Valley. Siri Lake can be accessed through Kiwai passing via Shogran Valley through jeep track.

Payee Lake is located at the elevation of 2895m in the center of Payee meadow in the Kaghan Valley near Shogran in KPK. It is surrounded by the mountains of Kashmir, Makra Peak, Musa ka Musala and Malika Parbat.  The Payee Lake can be reached through Kiwai passing via Shogran Valley by a jeep track.

Lulusar Lake or Lalusar Lake is located at the height of 3410m among a wide range of mountains in the Kaghan Valley of KPK. The lake can be reached after 287km drive from Naran Valley. It is one of the most popular Pakistan Lakes.

Swaik Lake is situated 10km away from Kallar Kahar, next to Khandoyah, in Punjab. It can be reached after 30km drive in the southwest of Chakwal along the M2 Motorway. It is a prominent Pakistan Lakes famous for its clear lush green water.

Lake Saif-ul-Malook is placed amongst the most famous Pakistan Lakes. It is located at the altitude of 3224m in the Saif-ul-Muluk National Park in Kaghan Valley of Mansehra district in KPK. The lake can be reached after 9km drive from the Naran Valley during summers. Saif-ul-Malook originated when the glacial moraines obstructed the water of a stream passing through the Kaghan Valley.

Saral Lake is present in the Neelam Valley of Azad Kashmir at an altitude of 4100m. It is one of the top lakes of Pakistan. The lake can be reached from Sharda-Jalkhad road via Gumut National Park and a hiking trek. Saral Lake is also accessible through Noori Top Road that leads to Lailan ki Basti in the Kaghan Valley.

The largest freshwater lake of South Asia is present in Pakistan to the west side of River Indus in the Jamshoro District of Sindh and is famously known as the Manchar Lake. It covers an area over 233km2. The best time to visit the lake is during winter when the temperature of the water is moderate. Manchar Lake can be reached after 18km drive from Sehwan Sharif on the Indus Highway.

Banjosa Lake is a prominent artificial lake located at the elevation of 1981m in the Bagh District of Azad Kashmir near Rawalakot. It is listed among the most beautiful Pakistan lakes as it is bordered by stunning mountains and a pine forest. The lake can be reached after 20km drive from Rawalakot in summers.

Pyala Lake is a striking Pakistan Lakes located in Jhalkand in Kaghan Valley of Mansehra District in KPK. It can be accessed after 40km drive from the Naran Valley. The Pyala Lake is named so because of its bowl-like shape. It lies on the top of a mountain on the way to Lulusar Lake from Naran Valley. The lake is yet undeveloped.